Two hazel sticks are propped the corner by the door.
They are whistle-sticks.
The knob is from the base of a red-deer’s antler,
the coronet of horn where it joins the skull
to be shed and regrown each year,
and one spur, the lowest on the stem.
This point is cut square and the pith hollowed
with a half moon slot cut in the side,
to create a whistle that is ready to hand
on any hill walk with the Nog.

(These sticks
and many besides – more crafted, exotic
are made locally by Sandy Wilson.

Big Sandy kept the hill for thirty year,
sat down one day to lunch in the heather,
and could barely stand thereafter
so rampant the rheumatic attack coming on him of a sudden
as if old age had followed on the path
and jumped on his back where he stopped awhile.)

while the new stick is good for the hill.

So I tell the generations of stick
in my house.
Worn by my hand
over many rough miles.
They lend a patina of usage,
pungent of home 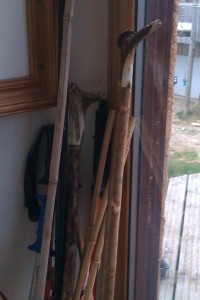